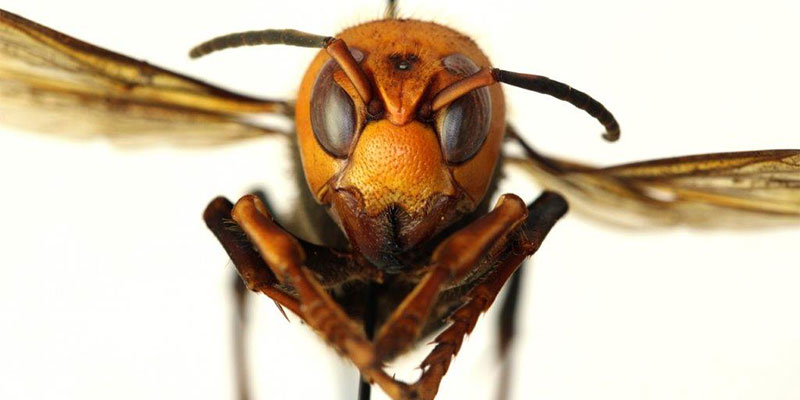 The agricultural and pest control industries are always on the lookout for invasive species. Invasives, or nonnatives, or exotic species as they may be called, can disrupt the way of life for a native animal, insect, or plant populations. These nonnatives often become major agricultural and structural pests because there are no native predators to combat the spread of the invasive species. Oftentimes they arrive under the radar and the general public is not aware until the problem reaches biblical proportions. And then there are “murder hornets.”

A Potentially Invasive Species of Hornet

The Asian Giant Hornet (vespa mandarinia) aka the “murder hornet” is the world’s largest hornet and it has been on the radar as a potentially invasive species for a while. Just a few months ago our team at Rambo Total Pest Control attended a seminar at the WSU/Puyallup extension office discussing this very issue. It is worth mentioning here that until a New York Times article using the name “murder hornet” was published on May 2nd, the name did not exist (to our knowledge). Now with countless memes and somehow miraculously swaying media attention away from the COVID-19 pandemic, it seems that name is here to stay. Still, we try to call things by their actual names so we’ll continue to refer to this insect as the Asian Giant Hornet, or AGH for short.

In its native region, the Asian Giant Hornet has been known to decimate honey bee colonies by entering a “slaughter phase” during which they decapitate the honey bees guarding the hive and pillage the brood, or young larvae, to bring back to their colony and feed to the next generation of Asian Giant Hornets. There are some amazing video links and loads of scientifically-accurate information at the Washington State Department of Agriculture’s website. We encourage you to check it out and learn what to watch out for. With today’s society of misinformation, this website is an excellent resource for determining what is real and what is hype, with regard to this insect.

You may have seen the video with Japanese Honey Bees (apis cerana japonica) surrounding an AGH and heating it up to a temperature of 115 degrees Fahrenheit to kill it. This species of the honey bee has evolved in a region with AGH and has devised this defense mechanism over millennia. Several years ago, National Geographic published a video that shows this process. It is remarkable to watch!

The European Honey Bees (apis mellifera) that make up the vast majority of our US honey bee population are also not native to our region, but they are of course considered beneficial. Unfortunately, they have not evolved around the AGH so they never learned this defense mechanism exhibited by the Japanese Honey Bee. The European Honey Bee would be very much in danger if AGH were to establish themselves here.

It is also worth noting that as of this writing there have been only two sightings of AGH in the United States, both in Blaine, WA last fall. This is not two colonies, simply two confirmed identifications of adult AGH specimens that were positively identified. Numerous insects may appear to be an Asian Giant Hornet to the layperson, but to the trained eye, they are very unique. Size comparison between the Asian Giant Hornet and other stinging insects can help tell the difference.

Working to Keep These Hornets Away

Many things can help to prevent the Asian Giant Hornet from establishing here in Washington State, and the greater United States for that matter. Climate probably plays a primary role, with geography, topography, and other natural factors. Human intervention could greatly contribute to limiting the spread of the AGH as well. Due to the location of the two confirmed sightings, WSDA is primarily interested in trapping assistance from residents in Whatcom, Skagit, Island, San Juan, Jefferson, and Clallam counties. If you are interested in contributing to this scientific research, the Washington State Department of Agriculture published a resource that teaches how to set hornet traps and monitor for AGH.

Hopefully, this can dispel some of the fear around the “murder hornets” the media has introduced. With that said, as with any venomous insect, AGH can be very dangerous and even lethal to humans. If you think you may have stinging insects of any sort that may be threatening you or your loved ones, please reach out to us via phone at 253-848-6000, 1-866-540-7262, or email: scheduling@rambopest.com. We will be happy to assist you in determining if you may have beneficial insects or something possibly more harmful. Take care and stay safe!